Long ago, in the early 1990s a ParkCare group was formed to take care of the native vegetation on Cooleman Ridge. Keen volunteers led by the indomitable Bess Sledge proceeded to plant natives, weed exotics and study the multitude of plant species. 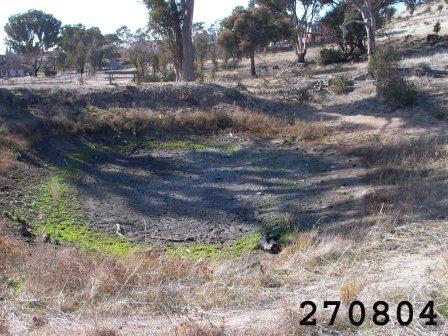 At the same time there was a drive to utilise Cooleman Ridge for cattle grazing for fuel reduction and also to provide a water supply for fire fighting vehicles in the event of a wildfire. For these purposes a dam had to be constructed. The ParkCare volunteers were not happy about cows trampling natives and spreading weeds, so they were at that time not happy about the dam but it seemed impossible to stop the construction. As a consolation the group got a barbed wire fence to enclose an area into which cattle could not enter. ParkCare activities as well as the need for fire prevention could be accommodated on Cooleman Ridge.

Time passed, the cattle grazing took place in another part of Cooleman Ridge where there was another dam. The Kathner Street dam slowly filled with water and attracted birds, fish, frogs and yabbies. It became a feature liked by both walkers and parkcarers, who could enjoy a peaceful rest on the bench listening to the quaking of the frogs and admiring the proud ducks with their broods of fast pedalling ducklings.

So, the group rather than considering the dam as an intrusion developed a feeling of ownership of the dam and decided to build a platform for the birds. Gösta Lyngå got the task of building it and of swimming out to anchor it in the middle of the dam. There was now more to look at and enjoy when relaxing on that bench.

However, the rainfall is not reliable and one day the dam was a dry hole with a bird platform in the middle of it. Throughout the years the water level in the dam has been varying between complete dryness like in August 2004 and a good amount of water as most of the time afterwards.

On the dam wall a number of trees took root and were believed to cause leakage from the dam. The views of the ParkCare group members has now been dominated by a wish to save the dam from leakage, so the trees have been taken down and now the dam is better filled than at any time before. This photo is from 11 July 2012.

A series of almost 300 photos of the dam between 2003 and 2012 have been taken by Pauline and Gösta Lyngå. Unfortunately, photos taken before January 2003 were destroyed in a bushfire. The photographic survey of the dam is continued by Arminel and Pat Ryan.

The Kathner Street dam is now the subject of regular Water Watch studies and enjoyed by wildlife as well as by visitors, particularly when a multitude of frogs give their evening concerts.