Cooleman Ridge has a surprising variety of animals. These include mammals, birds, reptiles, amphibians and insects.

The following list of animals is a featured summary of some of the more common and/or easily identified native species found on the ridge.

The list below is intended to showcase some of our more significant animal species and provide people who are unfamiliar with the native fauna on the ridge, a basic introduction to them.

Please see the Animal Survey page for a complete list of identified species.

The Pink-tailed Legless Lizard is a rare legless lizard found in Australia. The animal looks like a combination of small snake and worm.

They are most likely to be found in rocky outcrops in native grassland on north-facing slopes of the ridge where exotic grasses have not been encouraged by application of fertiliser, and there has not been extensive grazing.

When there is moisture in the soil, and before the ground has warmed above their comfort level they may be found under shallowly embedded rocks, in association with colonies of small black ants.

Over the years there have been only four record sightings of them. University

Wombats are stout marsupials between 90cm and 120 cm long and can weigh up to 36 kg.

They have a large, blunt head and a short, neck. Despite their slow appearance they can run quite fast. Their sharp claws and stubby, powerful legs make them great diggers. They dig burrows and tunnels in the ground for shelter and to escape from danger. Wombats can live for up to 27 years in captivity.

Wombats are usually found in wet, partly forested areas on the coast, and on mountain ranges.

They eat native grasses such as wallaby grass and kangaroo grass, sedges and roots of shrubs and trees. They cut their food with sharp front teeth which grow continuously.

Mating occurs between September and December, and usually results in one offspring. The newborn wombat, which weighs only 1 g and is less than 3 cm long crawls into the mother's pouch. This pouch faces backwards to stop dirt getting into it when mum is digging. The young wombat will stay in the pouch for between 7 and 10 months.

Wombats live in burrows, preferring well-drained soils that are easy to dig in. The burrows can be up to 30m long, and several metres deep.

There is not a lot of information out there on their distribution in Canberra. Wombats are distributed evenly across the ridge and often been seen in Tuggeranong near Gordon and Banks.

The yabby is the commonest of the freshwater crayfish in south-eastern Australia.

Small to medium in size, smooth-shelled. Usually brownish, but may be almost black, orange-brown, greenish or even blue.

They are mainly “detritivores”, eating dead or decaying plant material. Also like meat. Breeding: usually from spring to late summer; 200-400 eggs per brood; two or three broods per season. Reproductively mature at a small size. May breed in the first year of life. Females carry fertilised eggs under their tails (“berry”).

The Eastern Brown Snake is a venomous snake that is common on the ridge.

Adult eastern brown snakes are highly variable in colour. Whilst usually a uniform shade of brown, they can have various patterns, including speckles and bands, and range from a very pale fawn colour through to black, including orange, silver, yellow, and grey

The eastern brown snake is found all the way along the east coast of Australia, from the tip of Cape York, along the coasts and inland ranges of Queensland, New South Wales, Victoria, and South Australia.

The snake occupies a varied range of habitats from dry sclerophyll forests (eucalypt forests) and heaths of coastal ranges, through to savannah woodlands, inner grasslands, and arid scrublands and farmland.

The main component of their diet is rodents, particularly introduced house mice. Frogs, small birds, eggs, and even other snakes are also consumed

The Australian Wood Duck is a common waterbird.

This 45–51 cm duck looks like a small goose, and feeds mostly by grazing in flocks.

The male is grey with a dark brown head and mottled breast. The female has white stripes above and below the eye and mottled underparts.

The Australian wood duck is widespread in Australia. It likes artificial environments such as dams, urban parks, sediment ponds, etc.

These ducks are commonly found on the ridges two main working dams. The must breed there because little duckies can also be found there. 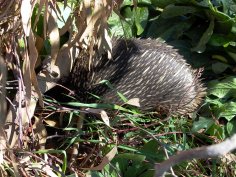 The Echidna is a a medium-sized, solitary mammal covered with coarse hair and spines. hey are usually black or brown in colour. Their diet consists largely of ants and termites

Echidnas do not tolerate extreme temperatures; they use caves and rock crevices to shelter from harsh weather conditions. Echidnas are found in forests and woodlands, hiding under vegetation, roots or piles of debris. They sometimes use the burrows of animals such as rabbits and wombats.

The echidna is the only known monotreme (i.e. laying mammal) found on the ridge. Echidnas however, are quite common on the ridge and sightings are regularly reported. The most common sightings are around Kathner Street and on Mt Arawang. There have even been reports of pairs of echidnas. 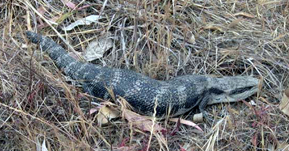 This reptile is not venomous, and is often found in suburban gardens where it eats snails and other invertebrates, as well as fruits and berries. It may grow to 50 cm, and produces around a dozen live young in summer.

Eastern blue tongues are quite common on the ridge and often make their way into backyards adjoining the ridge. The commonly found on the summits of many of the hills as these are typically places where large rocky outcrops are found. The are generally only observed in the warmer months when they are most active. 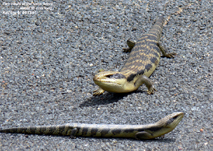 Red-bellied black snake is one of the two common snake species found on the ridge.

Its colour is shiny black on the upside, with reddish lower sides and belly.

It has a distinctive weak face stripe; weak to absent thigh stripe; rusty-red shoulders and upper back; rest of body silver tipped with grey.

It lives in dry open forests with some brushy undergrowth, grasslands, roadside verges, paddocks and backyards. Coastal eastern Australia from Gladstone, Qld south to SA/Vic border. Sub-species on Tas. and Bass Strait islands is M. r. rufogriseus. (It’s also a pest near Canterbury in NZ – transported there in 1870!)

It is threatened by creek-side and ridge-top clearing, cars and dogs.