The Ridge has always been affected by fires. Burning was introduced by Aborigines who regularly used low intensity fires to manage the land for their purposes.

European settlers generally believed that fire was bad as it not only destroyed food but risked destroying infrastructure such as fences, sheds and homes. Fire was therefore generally suppressed.

As the Ridge is now a nature reserve, the ACT Parks and Conservation Service adopts a number of methods to reduce the fuel load and manage the risk of serious fire damage:

However, fire management on the Ridge is no match for the type of catastrophic fire that swept over it in 2003.

A lightning strike started the fire at McIntyre’s Hut in southern NSW in the week before Saturday 18 January. It rapidly spread and by early afternoon on the Saturday it had swept up and over the Ridge and into the neighbouring suburbs of Duffy, Chapman and Kambah. Four people lost their lives and over 500 houses were destroyed. The Ridge itself sustained extensive damage: completely blackened with not one green leaf nor blade of grass over the entire Ridge, a large number of dead animals and the top of the large square reservoir blown off. Furthermore, valuable photos and records were destroyed when Group members, Gosta and Pauline Lynga, lost their house.

Devestated but undaunted, the Group set about restoring and regenerating the Ridge, and such work continues to the present day. 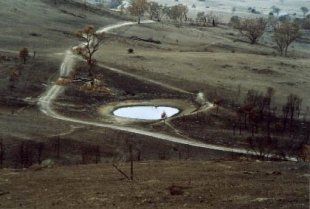